skip to main | skip to sidebar

When Bill worked for the Chicago Children’s Choir, we hosted a guest musician from Hong Kong. To thank us, he made an amazing South Asian feast, which featured this dish.

Make chicken broth with the wings, back, neck and sweetmeats
Brown the legs, thighs, breasts in 2-3 T of olive oil; add onions and greens, sauté until vegetables release liquid (10 minutes on very low heat). Add spices and sauté another 10 minutes. Dredge with flower, sauté 2 minutes, then add 1 cup of the chicken broth until the flour has smoothed into a creamy broth. Add the rest of the chicken broth, the cut up carrots and potatoes, and the cream and adjust the spices. Simmer at least 30 minutes, up to an hour. The longer you simmer, the thicker the sauce will be.

Serve over rice. Makes about 8 servings.
Posted by Alexandra at 6:25 PM No comments: 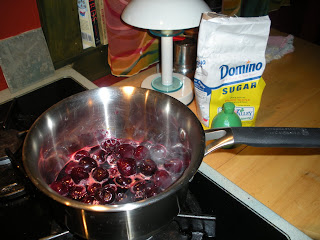 I’ve been into syrups this year. Don’t like commercial sodas, but I do like fizzy drinks. I’d been buying Toranis, but they’re expensive and I get tired of the same old flavors. I started by going on line and finding syrup recipes through the magic of Google. Most of them are for use over ice cream or pancakes, but if you strain them a little more they work for adding to sparkling water or tea just fine. I’ve found that a hand food mill and then cheesecloth strain work better than trying to thin/pulp them with a food processor. By this time I’ve made from fresh fruit: lemon, lime, raspberry, blueberry, orange. From frozen pulp or concentrate: mango, passion fruit, orange. And from frozen whole fruit: blueberry, raspberry, cherry, mango, peach. A basic recipe is 1 to 1 to 1 ratio of sugar to fruit to water. Make the sugar syrup first:

While the sugar syrup is acookin’, you want enough fruit to end up with 1 1/4 c. of liquid, which seems to be about 3 cups of most fresh or frozen fruits, 1 1/2-2 cups of pulp or concentrate. Lemon and lime, use much less— 1/2 to 3/4 c. with this amount of syrup. If you are using fresh, pulp, or frozen fruit (as opposed to a citrus juice), heat it until the structure breaks down, but try to stop short of releasing the pectin— this will make your syrup too sticky. I’ve been eyeballing it but someone here maybe knows the temp?

Depending on the fruit, and how thin you strain it, this recipe will yield about 2 cups of syrup, although I’ve gotten as much as 3 1/2.

Here again I’ve been experimenting. You can add the syrup to the pulp (might add a little water here), take it back up to 200 degrees, then strain it, or strain the fruit first, then add the juice into the syrup, then to 200 d. for another ten minutes. I’d be interested in hearing people’s experiences with this.

To boost the flavor, I’ve toyed with the idea of adding commercial extracts (peach extract, etc.) with some of the more delicate fruits, but that seems like cheating, somehow.

Needless to say, the citrus juices work best, especially if you add in the zest to the syrup stage. I’ve also been trying out different herb additions. (lime-coriander, orange-fennel, lemon-basil, lemon-peppercorn, peach-vanilla).
Posted by Alexandra at 5:34 PM No comments:

This one is brand new to the repertoire; I first made it last winter from a recipe I found on About.com. The only problem with this one is you have to make it several hours in advance so it can sit in the fridge and set. Drain crabmeat; gently squeeze to get as much of the liquid out as possible. Put crabmeat in a bowl. With a spatula or wooden spoon, fold in mayonnaise mixture and 1 cup of the bread crumbs, just until blended. Shape into 8 crab cakes, about 2 1/2 inches in diameter. I use a biscuit or cookie cutter with an open top to shape the cakes and press the ingredients down to make them hold together. Press gently into reserved crumbs. Cover and chill for 1 to 2 hours. 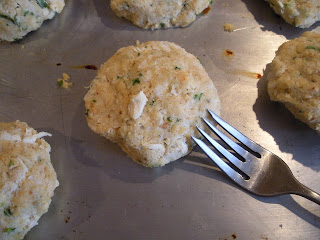 Heat clarified butter or oil over medium heat. Fry crab cakes for about 5 minutes on each side, carefully turning only once. Serve with lemon wedges and Remoulade or other sauce. 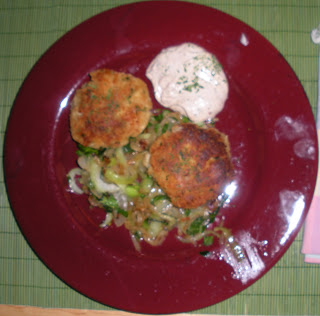 Posted by Alexandra at 11:18 AM No comments:

If you define comfort food as the food your mother makes, then every recipe in here will fall under that rubric. But this is true comfort food, one that everyone can agree on. Naturally, first the back story.

When I lived in Austria, my Austrian friends had an image of Americans built upon their encounters with tourists and their parents' encounters with American soldiers after the war. They therefore believed that no American ever cooked-- they always ate at restaurants (tourists) or directly out of a can (soldiers' c-rations). My friend Ulli was consequently shocked when I made a tuna casserole for her, where the only food item from a can or package was the tuna (which you couldn't get fresh in Austria for anything approaching an afforadable price). I make it truly from scratch-- no canned mushroom soup here.

one medium onion, diced
3 stalks celery, diced, if desired
2-3 large pats of butter and equivalent amount of flour
1 1/2- 2 c. scalded milk
large can of tuna
4-5 c. egg noodles or 3-4 c. rotini
1-2 cut up carrots
about 20 small florets broccoli
parsley, caraway, salt and pepper to taste
breadcrumbs
grated cheese (a hard and/or non-oily cheese works best. I like mozzarella or romano, but Monterery Jack is also nice. Cheddar and American are wrong for this, don't use them)

You can make this hours or days ahead of when you eat it. Make it on a Sunday afternoon, then pop it in the oven when you get home from work sometime later in the week.

In a large saucepan, boil enough water for the pasta. Add the carrots when you set the pot on the stove. Two minutes before the pasta/noodles are done, add the broccoli so that it just blanches. If the pasta is done before the sauce, drain it and set it aside in a greased casserole (I use cooking spray, but you can also grease it lightly with butter).

While the pasta is boiling, make the sauce:
Scald the milk in the microwave, about 5-6 minutes at 80% power.

While the milk is scalding, cook the onions (and celery if you like it) in a 2-quart saucepan in about a 1/4 c of water, until transparent. Melt the butter in the onions; before it browns add the flour and saute over very low flame for 2 minutes, stirring constantly and not allowing it to brown. Turn off the flame; when the sizzling stops, turn the heat back on low and add about 1/4 cup of the scalded milk. This will instantly create a thick paste; immediately start adding the rest of the milk very slowly, stirring constantly to create a creamy sauce. Add the seasonings and tuna and simmer uncovered very low for about 10 minutes, stirring occasionally, and being careful not to let it burn.

When the sauce has thickened slightly, fold it into the pasta/veggie mixture, making sure that the fish, carrots, and broccoli are evenly distributed throughout. Lightly sprinkle just enough bread crumbs to cover the top, then same thing with the grated cheese.

Bake uncovered at 350F for 25-30 minutes (depending on how browned you like your cheese).

Serves about 4
Posted by Alexandra at 7:01 AM No comments:

Julian is living at home right now, so I'm trying to remember that there needs to be food in the house, and that I'm not cooking for just one on Bill's rehearsal nights. But tonight Julian is out with friends, so I stopped at the grocery store and picked up a picnic.

A lovely little brie, with some Wheat Thins. They didn't have any pate, so I got poor man's pate--braunschweiger (which will be wonderful on an over-toasted piece of Bill's home made bread). Fill it out with some stuffed grapevine leaves (the kind from the deli, not the homemade ones), dried figs and a beer. Cheesecake for dessert.

Simple and delicious.
Posted by Alexandra at 7:42 PM No comments:

Mahlzeit, literally "meal time" is an Austrian colloquialism roughly meaning "Bon Appetit" or, in American, "let's eat." It's the expression we've always used at the start of a meal, and the name my son immediately came up with to name this blog.

So, these are our family recipes, and undoubtedly some musings on food and family, because I sometimes have this arrogant idea that what I think matters.
Posted by Alexandra at 7:36 PM No comments:

Visit me on Tuesdays at Not Dabbling in Normal

Mahlzeit, literally "meal time" is an Austrian colloquialism roughly meaning "Bon Appetit" or, in American, "let's eat." It's the expression we've always used at the start of a meal.

So, these are our family recipes, and undoubtedly some musings on food and family, because I sometimes have this arrogant idea that what I think matters.

I'm just a mom who likes to cook; I hope this blog is helpful to people who want to eat well at home. Also find me:

being a skating coach:
Xanboni!

being the parent of an adult:
House of the Blue Lights

I also have a garden journal at MyFolia.com. Are you a gardener? Come join the conversation!

Alexandra
A gardener, a cook, an artist. My hair is pink and my soul is old. 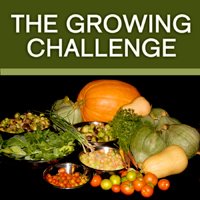